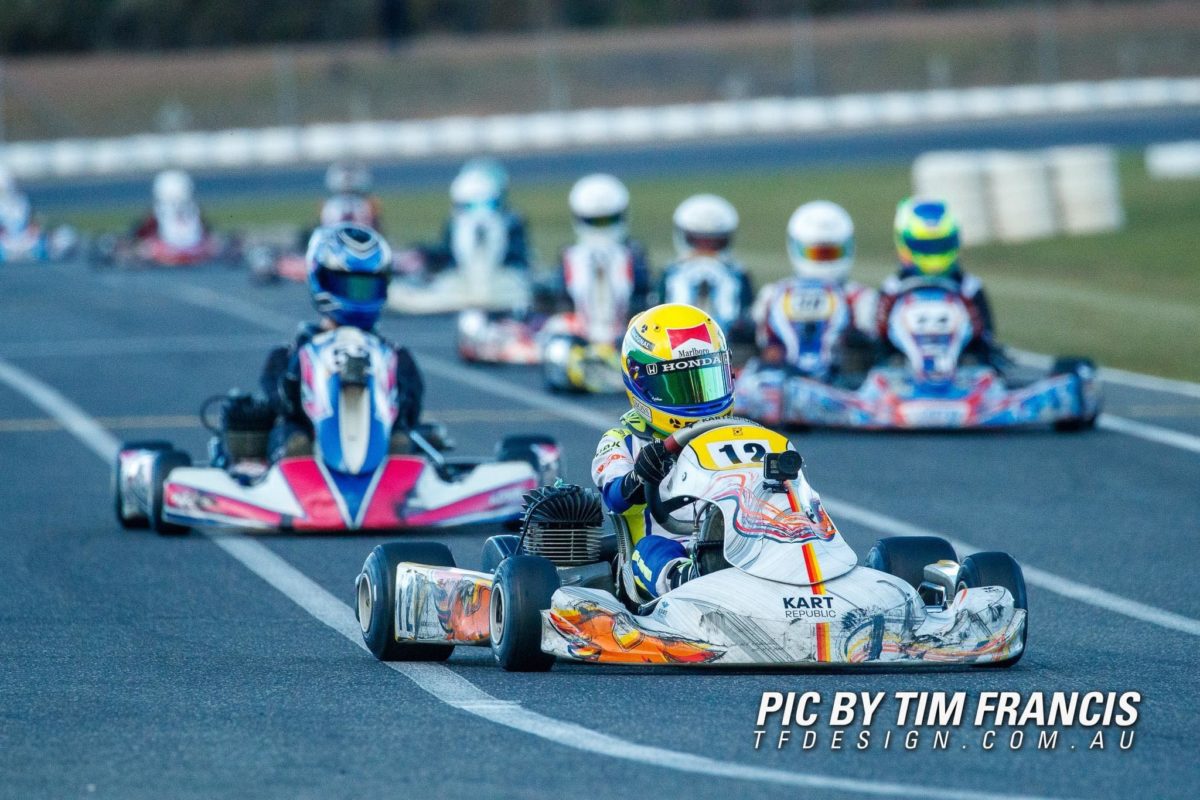 A1 Engines Motorsport had another huge presence at the fourth round of the Golden Power Series over the weekend at the Eastern Lions Kart Club.

A mammoth 31 drivers across 12 of the available 13 classes competed under the A1 Engines Motorsport power.

With the series proving to be a happy hunting ground for the team in season 2022, Brett Arnett was looking to lead the team to more victories and strong results.

Stradbrook was able to qualify on the front row of the grid in second spot.

Phil was unfortunately spun around in the opening heat, but he was able to recover to sixth place in a great fightback.

For the remainder of the heats Stradbrook was able to run inside the top three.

Phil saved his best until last taking the lead in the final and not looking back, taking the round victory for the A1 Engines Motorsport team.

Interstate racer Ayrton Dalmaso and Cooper Synfield were the double A1 Engines Motorsport act in the KA3 Junior category.

Both drivers put in strong performances in qualifying with a fifth for Dalmaso and eighth for Synfield.

Dalmaso led the charge for the team with his best results a fifth in heat one and strong third in heat three.

Synfield never left the top ten in the heats setting up a bumper final for the two drivers.

Both Ayrton and Cooper showed excellent pace in a high-quality final coming home in 7th and 8th respectively.

Trebilcock was able to lead an A1 Engines Motorsport trifecta in qualifying over Thompson and Callow.

Ceveri was just outside the top ten in twelfth, with Bright in 25th.

A1 Engines Motorsport was able to continue the trifecta in all three heats, with Thompson taking three heat wins over Trebilcock and Callow.

Both Ceveri and Bright had incidents and set backs across the heats but were improving into the final.

Thompson and Trebilcock had a super close battle in the final with Thompson being able to clean sweep the round, with Trebilcock right behind in second spot.

Ceveri after being well inside the top ten in the final had incident dropping back to 22nd, with Bright right behind in 23rd.

Tate Waddington was the youngest driver under the A1 Engines Motorsport banner running in the Cadet 9 class.

Waddington qualified in fourth spot but never left the top three in the heats with two thirds and a second putting him in podium contention.

Waddington wasn’t able to go with the front two drivers but was able to put in one of his best performances of the season, with a strong third place podium finish.

Ford and Thompson led the way in qualifying in fourth and seventh respectively, with Belton and Bright down in 22nd and 24th.

Thompson and Ford were both able to take heat wins, with Ford putting himself up on the front row of the grid for the final.

Bright and Belton were both able to make their way into the top 20, improving across the weekend.

Ford was able to battle in the lead pack all final and cross the line in first but a heart-breaking post-race penalty dropped him back to 11th.

Liam deserved the victory and will be back bigger and better at the next round.

Thompson after showing strong pace crossed the line in 14th after a final that didn’t go his way.

Bright was able to come home with his best finish of the weekend in 15th, while Belton unfortunately finishing the weekend with a DNF result.

Arnett put himself on the front row of the grid in qualifying, with Bright also inside the top ten in sixth.

Belton was just outside the top 10 in position twelve looking to move forward.

All three drivers put in strong performances across the heats with a second and first in the heats.

Arnett ran second for the first half of the final, but was able to take the lead and take his second consecutive round win.

Bright was able to come home just off the podium in fourth spot with Belton just outside the top ten in thirteenth spot.

Marc Tune was the sole A1 Engines Motorsport driver in the TAG 125 Restricted Heavy class.

Tune put himself inside the top five in qualifying and made his way forward to third in heat one and two and an excellent second in the final heat.

Marc was right in the battle for second, third and fourth in the final, chasing hard for a podium spot.

Tune was able to put in another consistent performance coming home with fourth spot overall and grabbing more good points for his championship.

William Thompson, Tannah Peters and Kale Waddington were all representing A1 Engines Motorsport in the KA4 Junior Light class.

Thompson qualified on the front row of the grid to lead the brigade, with Peters in tenth spot and Waddington in 18th.

Thompson continued to lead the way in the heats with a win in heat two and third in heat three.

Both Peters and Waddington battled inside the top 15 in the high-quality field.

Thompson was able to put in a smooth and calculated drive in the final with a podium finish of third spot.

Peters and Waddington fought on gamely and came home just outside the top 10 in 12th and 15th.

KA4 Junior Heavy had the all-lady attack of Lucy Sidwell and Ella Dealy for A1 Engines Motorsport.

Dealy qualified in 13th and Sidwell 20th, with both drivers looking to move forward across the heats.

Dealy led the team charge finishing all three of her heats in the top ten, with a remarkable third in heat three.

Sidwell continued to move forward and push forward on the edge of the top 15.

Both drivers were able to come home inside the top ten in a remarkable recovery, with Dealy in 7th and Sidwell in 10th.

Davies put himself third in qualifying with Mcswain, Darcy and Walmsley in ninth, 13th and 18th respectively.

Both Davies and Darcy did a superb job in the heats, with a second and two fifths for Davies and a fourth and second for Darcy, after starting in 13th.

Mcswain also moved forward into the top five, while Walmsley was hovering around the edge of the top 15.

Mcswain was able to lead the charge and improve to fourth spot in the final.

Unfortunately, both Davies and Darcy were involved in incidents dropping them back to thirteenth and sixteenth, with Walmsley rounding out the four in 18th.

Cadet 12 was a young class with plenty of A1 Engines Motorsport flavour with Addyson Arnett, Jenson Jobe and Jimmy Swatton hitting the track.

Arnett qualified in position twelve with Jobe and Swatton outside the top 20 in 22nd and 24th respectively.

Arnett led the way with an eleventh and top 10 finish of eighth, while Jobe and Swatton were both able to move forward positions across the heats.

Jobe was able to make his way to the edge of the top ten in the final with an excellent 11th.

Swatton moved forward to the edge of the top twenty in 21st, while a DNF brought to an end the charge of Arnett.

Kemp was able to qualifying on the front row and continue his strong weekend, with two second places and a front row start for the final.

Flynn and Sloan qualified in position ninth and 15th respectively, with Flynn making his way as high as third in the heats and Sloan as high as 12th.

Kemp was right in the battle for victory and was able to come home with his first round victory of the season.

Flynn was able to continue his strong weekend, with seventh place in the final, while Sloan finished just outside the top 10 in 12th.

A1 Engines Motorsport team owner Brett Arnett spoke post-weekend on the round that was.

“It was another awesome weekend with the A1 Engines Motorsport team.

“Four victories and another lot of podiums to go with it was an awesome result and we love going racing with our team.”

A1 Engines Motorsport will be back at the next round of the series in September at the Rochester Go Kart Club.